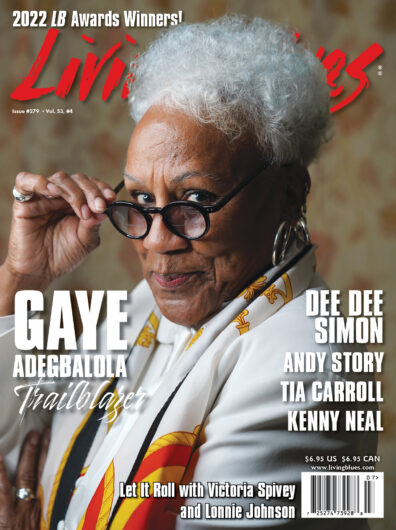 There is nothing conventional or conservative about Gaye Adegbalola. She has been speaking up and speaking out her whole life. A founding member of Saffire—The Uppity Blues Women in 1984, Adegbalola continues to make her life in music matter.

California-based Dee Dee Simon has lived the highs and lows of the music industry but she has landed on her feet during the pandemic, producing several “Queens” projects focusing on women of the soul blues scene.

Cover New York City from Greenwich Village Up to Harlem

Virtually unknown outside of New York City, guitarist Andy Story should have been more widely appreciated. Story died while we were producing this feature on him. We hope this will stand as a fitting legacy to an overlooked blues guitar master.

Late Bloomer Ready to Take Her Blues to the World

Vocalist Tia Carroll cut her teeth in rock cover bands but after hearing a Koko Taylor CD she realized her calling was the blues. With one of the top albums of last year, Carroll is finally getting the attention her talent deserves.

Two of the giants of pre-war blues, Victoria Spivey and Lonnie Johnson, had a special bond. The two recorded together several times but their October 1928 session was rife with songs of striking visual imagery and some of the steamiest double-entendre songs ever recorded.