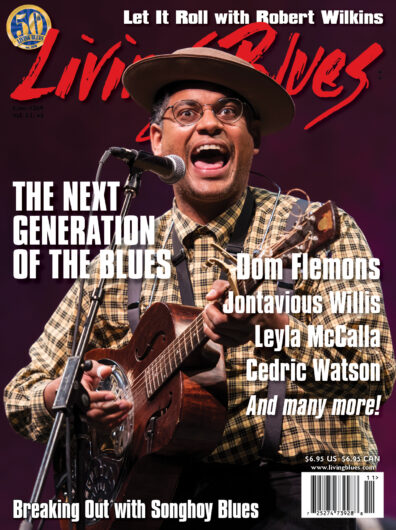 By Scott Barretta
At age 38 multi-instrumentalist Dom Flemons has spent the last 15 years taking a deep dive into the roots of African American music eager to understand more about the story of the blues. First as a founding member of the Carolina Chocolate Drops and now as a solo artist, Flemons has dedicated his life to sharing what he learns.

Greenville, Georgia native Jontavious Willis fell for the blues 10 years ago and since then has been laser focused on learning, exploring and sharing the blues.

Finding Her Voice and Using It

Another member of the Carolina Chocolate Drops to set off on a solo career, New York-native Leyla McCalla has spent the last decade discovering her own voice and exploring the power of music paired with a social conscious.

Multi-instrumentalist Cedric Watson is a true expression of the modern Creole man. An early member of the Pine Leaf Boys, Watson has dedicated his life to exploring the music and traditions of his native eastern Texas and south Louisiana.

The Next Generation of the Blues

Memphis bluesman Robert Wilkins walked in through the rear entrance of the Peabody Hotel for his first recording session for Brunswick Records and laid down four sides that day, including his most influential side That’s No Way to Get Along.

The Blues Will Never Die

Fifty recordings by 50 artists born since Living Blues was founded in 1970.

Artist to Artist with Christopher Henderson