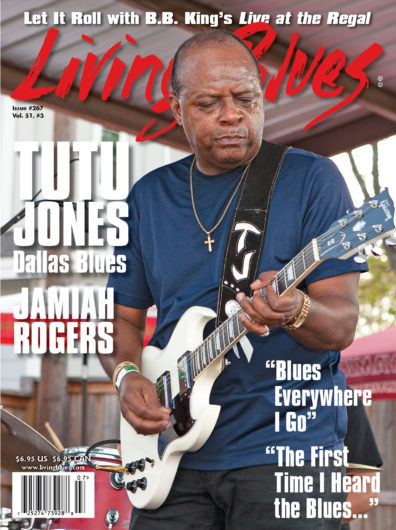 VOTE in the 2020
Living Blues Awards.
(voting has ended)

We Never Quit. We Die in Music

South Dallas bluesman Tutu Jones burst onto the scene as a hot, fresh young guitarist in the 1990s. Things didn’t necessarily work out as planned over the next two decades but Jones has never given up. A little older and a lot wiser, now he is ready to be heard.

I Want to Continue Playing the Blues

Chicago’s Jamiah Rogers is just 25 but his presence in the local scene is exploding. One of the most popular young local blues artists today, Jamiah Rogers is the face of the future of Chicago blues.

A list of 50 songs that capture the blues in some of its many venues.

We all recall our first truly memorable experience with the blues, even blues artists themselves. We explore some of these moments from the pages of LB’s first 25 years.

Recorded over two nights at the legendary Regal Theater in Chicago, B.B. King’s Live at the Regal is one of the greatest live recordings in the history of the blues.