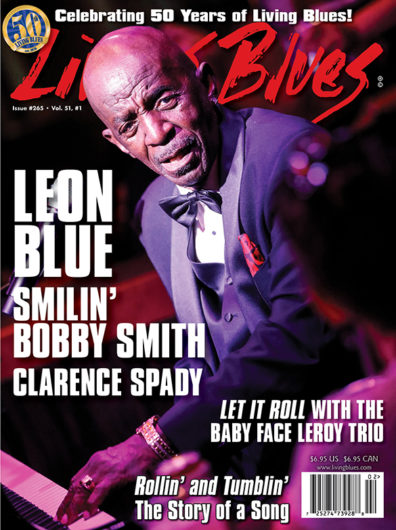 Leon Blue Is His Real Name

Eighty-eight-year-old Leon Blue has had a remarkable, though mostly under the radar, musical career. Through run-ins with Bob Wills, recording with Lowell Fulson, and touring with Ike Turner and Albert Collins, Blue has seen it all.

Chicago club stalwart Smilin’ Bobby Smith has been playing the blues since the early 1960s and yet many fans may not have heard of him. Smith plays live most nights, but his lack of recordings has made his career a local one. And he likes it that way.

Another Trip Around the Sun

Pennsylvania-based bluesman Clarence Spady exploded on the scene in the 1990s but personal issues put his career on hold. Over the last decade he has been rebuilding his career and tearing up the local festival scene and New York club scene.

Perhaps the grittiest song of all recorded by Foster, Waters, and Walter was their version of Rollin’ and Tumblin’. We trace the history of this classic blues song.

A visual tour of 50 years of Living Blues. Plus, the first of a series of “50” lists from Jim DeKoster.

Artist to Artist with E.C. Scott

Breaking Out with Dexter Allen