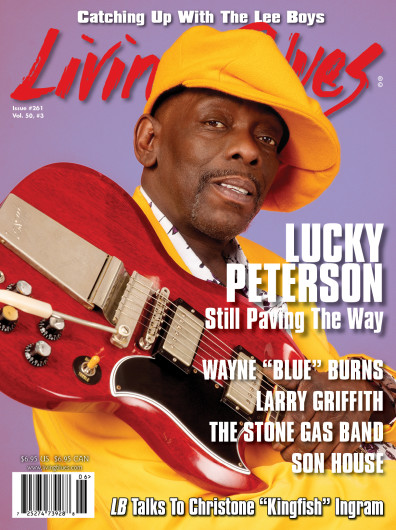 Multi-instrumentalist and vocalist Lucky Peterson recorded his first album 50 years ago. Still only in his mid-50s, Peterson is at the peak of his prowess in the blues world.

I’m Playing What I Came Up With

Louisiana native Wayne “Blue” Burns spent most of his career as one of the preeminent bass players in the zydeco scene and did long stints with Clifton Chenier, Fernest Arceneaux, and C.J. Chenier. But these days Burns has stepped out front and is making his own music, this time playing guitar.

Telling His Own Story

As a teenager in Cincinnati, Ohio, Larry Griffith worked as a practice session drummer for the local King, Fraternity, QCA, and Jewel record labels. Moving to the Atlanta area in the 1990s, Griffith followed his musical path as a drummer, as well as a guitarist and songwriter.

A Tribute to Johnnie Billington and Arthneice “Gas Man” Jones

The Stone Gas Band was a legendary blues band in the Mississippi Delta in the late 1980s through the mid-1990s. After over 20 years apart, the group has reformed and has recorded their first CD as a tribute to founder Arthneice “Gas Man” Jones.

On September 3, 1941, Alan Lomax set up his Presto Model Y portable recorder in Lake Cormorant, Mississippi, and proceeded to record some of the most quintessential field recordings in blues history.

Artist to Artist with Jimmy Burns

Catching Up with The Lee Boys