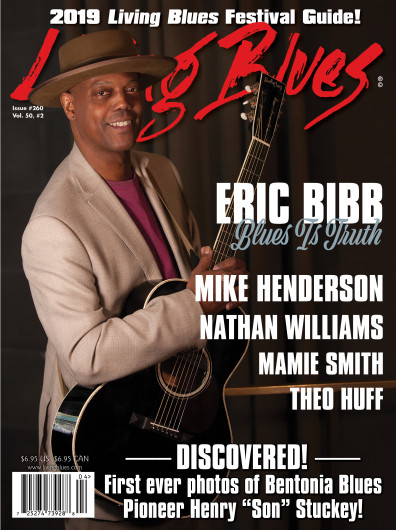 The Essence of Blues Is Truth

Eric Bibb’s music is rooted in the American blues tradition, but the scope of his vision is expanded by his world travels and musical partnerships. The message in his songwriting is powerful and mature, and his music blends seamlessly with artists of a diverse number of cultures.

California bluesman Mike Henderson is a true Renaissance man. His artistic skills are wide ranging. A musician, filmmaker and painter, Henderson has pursued his vision and craft for more than 50 years.

I Got More Soul Than a Shoemaker

Zydeco frontman Nathan Williams has spent his life immersed in the culture of southern Louisiana. Schooled at the feet of men like Clifton Chenier and Buckwheat Zydeco, Williams is intent on carrying on the zydeco tradition.

Henry “Son” Stuckey and the Origins of Bentonia Blues

By Michael Schulze with Jim O’Neal

Bentonia blues pioneer Henry “Son” Stuckey is credited as a major influence on Skip James, Jack Owens and Duck Holmes. Until now there have been no known photos of the man. We publish recently uncovered photos of the influential musician.

The inaugural article in our new column from Jas Obrecht focuses on the first blues recording session, Mamie Smith’s Crazy Blues. We take you behind the scenes, into the recording studio for this famous 1920 session.

Artist to Artist with Annette Taborn

Breaking Out with Theo Huff