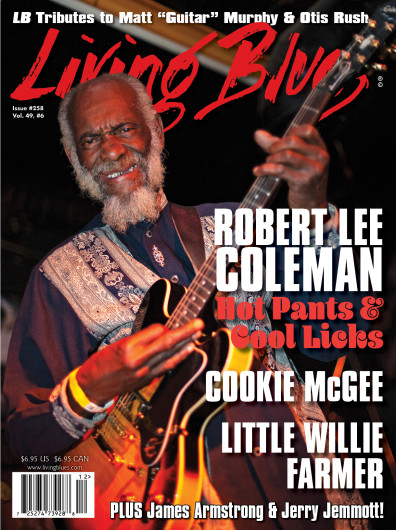 Macon, Georgia–native Robert Lee Coleman cut his teeth in local gospel bands, but it was his 1960s stint with Percy Sledge and early 1970s stint with James Brown that shaped his career.

I Was Just Determined

Providence struck the young Cookie McGee when she discovered her neighbor and the father of her playmates was none other than bluesman Freddie King. Through the years her music career has been on and off but it is definitely on again now.

When You Play You Get Something Spiritual That Hits You Inside

Duck Hill, Mississippi, may not be known as a blues town, but local Little Willie Farmer may just change all of that. His first release received rave reviews and a forthcoming CD on Big Legal Mess should garner him major attention.

Matt “Guitar” Murphy lived up to his nickname. Doing session work with everyone from Memphis Slim and Bobby Bland to Chuck Berry and Muddy Waters, the Mississippi native earned a reputation as one of the best guitarists in the genre. We celebrate his life and nearly 60-year career in our tribute to the guitar genius.

Otis Rush’s music is relentlessly aggressive, precise and never without a sting. From his 1956 release I Can’t Quit You Baby until the day in 2004 when a stroke robbed him of his ability to perform, Otis Rush took no prisoners and left no musical stone unturned. We celebrate the life of the Chicago blues guitar shaman in our tribute.

Artist to Artist with Jerry Jemmott

Catching Up with James Armstrong