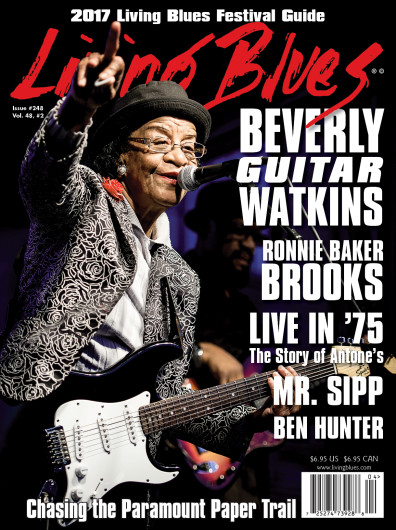 Atlanta guitarist Beverly “Guitar” Watkins has spent nearly 60 years breaking molds and smashing stereotypes. From her earliest years with Piano Red (as part of Dr. Feelgood and the Interns) to later fronting her own band, she has thrilled audiences with her guitar chops and onstage antics.

What Comes From the Heart, Reaches the Heart

Bluesman Ronnie Baker Brooks is yet another entry in our ongoing series of next generation blues players. The son of Lonnie Brooks, Ronnie has matured into a top-notch bluesman.

By Steve Dean, with Philip Barnard

Storied Austin nightclub Antone’s was the epicenter of a Texas blues revival during the late 1970s and 1980s. Author Steve Dean (who owned OK Records located next door to the original club) was there for it all and shares his memories of those heady days.

On the Paramount Paper Trail

The second part of our ongoing celebration of Paramount Records’ centennial focuses not on the records, but rather on the advertising art used to promote and sell the records. Included is the account of John Tefteller’s recent discovery of a treasure trove of original art and the role of the F.W. Boerner Company in the story of Paramount.

Breaking Out with Ben Hunter