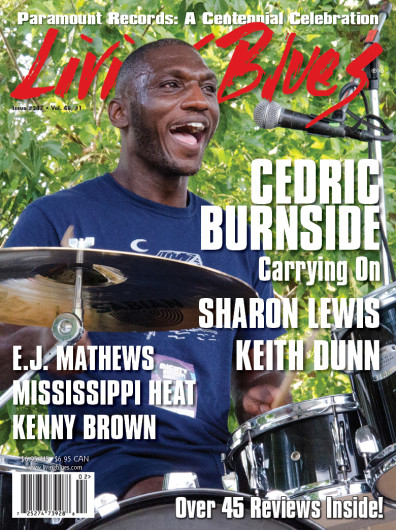 Cedric Burnside, the grandson of R.L. Burnside, creates music that is steeped in the sounds of the Mississippi Hill Country. Cedric has picked up the mantle of the family tradition and is proudly carrying on the unique sounds his family has created for generations.

Some Things Need to Be Said

Chicago vocalist Sharon Lewis is finally coming into her own as one of the premier blues singers in the Windy City. On the heels of her latest release on Delmark Records, Lewis is poised to make this her break out year.

Either You Can Throw Down or Get Off the Stage

Boston-born, Rotterdam, Holland–based harp player Keith Dunn may not be a familiar name to blues fans in the United States after 30 years in Europe, but that doesn’t mean his music is any less powerful.

Paramount Records, the most iconic pre–World War II label among collectors, was founded in 1917. This is the first of a series of articles Living Blues will publish in honor of the 100th anniversary.